the gift of delay 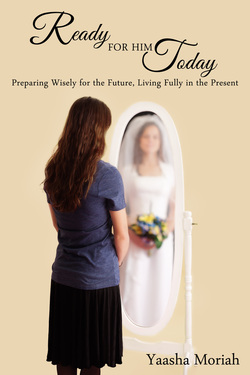 "Do You really want me to do this?"

I asked that question many times as I prepared READY FOR HIM TODAY for publication. Initially, I had had rosy dreams of finishing the final edit, of receiving my parents' blessing on the project, of sailing into the publishing world with a shining masterpiece, and of watching my book take the nation by storm.

God must have laughed at me, and I can't really blame Him. My dreams didn't include much work--and it turned out that preparing this book for publication has been some of the hardest work I've yet experienced. I planned to have my book published in the year 2012. Well, the year 2012 was the year of innumerable edits, multiple parental reviews, and roadblock after roadblock.

I started to fear the question, "So, how's your book coming along?" because it seemed that my answer was the same every time: "Oh, I'm almost ready for publication!" (Translation: More "almost ready" than I was three months ago, but not "almost ready" enough to actually publish yet.)

In the back of my mind were two nagging thoughts which I tried to ignore.

The first was that, at the prices for publication, I could find no way to break even, if I sold my book on online. The selling fees drained away any profit (however meager). I would be lucky if I even recouped my publication costs. I ran the numbers for multiple scenarios and the answer was still the same. Publication was financially unfeasible.

Secondly, I knew my book was missing a crucial piece--an ending. That is, I had an ending and I felt that it wrapped up my main points nicely. But that was the problem. It was tame prose, moving from point A to point B sedately, tying up the loose ends and wrapping it all in a neat little mental package. I wanted something different, something wild and untamable and unpredictable. Something that exploded outside of the neat little mental box into pinwheels of color and light, and that left steamers of thought-glitter long afterward.

Months passed and the project continued. Deadlines stretched, obstacles challenged me, and it seemed that my book dragged its feet the entire way to the publisher.

Then, one day, my low expectations exploded into ecstasy.

"Wait? Is this right? It can't be!" I stared at the computer screen. I reloaded the webpage several times to make sure that what I was seeing was real. I got out my pocket calculator and scribbled furiously on my notepad. I rechecked my calculations. Then I leaped toward my phone.

"Mom! Mom!" Grateful tears sprang into my eyes. "All this time I was so frustrated that publication kept getting delayed...but if I had published when I had originally wanted to, the project would have been economically impossible. I was willing to do it, because God kept confirming that I shouldn't give up, but I would have lost money in the long run. Now I know that He kept pushing back the publication date so that I could afford it. Mom, you'll never believe it, but the publisher's printing price has gone down by four dollars per book!"

But there was more.

One weekend in November, my world changed. I had seen the change coming years earlier, but it was a little like seeing a tidal wave rolling in; however clearly I could see it, nothing could prepare me for its arrival. My younger sister Keren got engaged. For me, this was monumental. As the oldest, I was used to being the first to step into each new stage of life, so I expected to be the first to marry. But it wasn't going to happen that way. In the blizzard of feelings surrounding my sister's engagement, the truths in my head and the emotions in my heart warred with each other fiercely. I wondered why I thought I was qualified to write about any of the topics in READY FOR HIM TODAY.

"Ask somebody else, God. This is too much for me."

All of my questions were blasted away by a fierce brilliance as He opened my mind. The truths that I had known but not felt now blossomed. It was like I saw colors that I had never seen before. The single life that had terrified me suddenly dazzled me with its beauty.

"I never saw singleness, or marriage, or You like this before. How many people have seen this? There can't be many, because I've never heard anyone talk about things like this before. This is incredible! I don't know what to say, God."

Yes, you do. You have an ending to write.

I wrote like I had never written before, and the "neat little package" rent in two, for the truth that it contained was too big for the box. I was a little frightened. Could I do justice to the image God had planted in my heart? I didn't have enough skill to paint with colors that so few people had ever even seen.

"What do you think of my new ending, Dad?" I asked anxiously, as he read yet another almost-final draft.

My dad was quiet for a moment, and I worried that my ending had lost him. Then he turned and I saw tears sparkle behind his glasses as he pulled me into his warm embrace. "Honey, it's beautiful."

I know now that the delay was about much more than money. My entire book had been delayed so that I could finish it. It had been waiting for the ending--a vision of the beginning of something incredible.